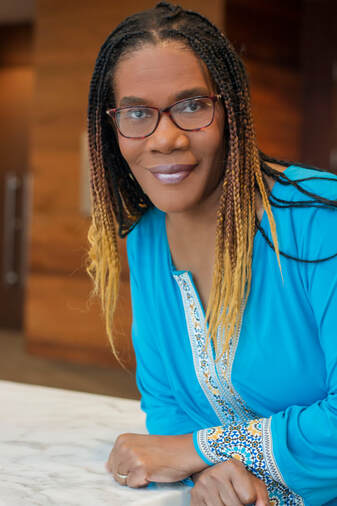 Photo credit: Chandra V. Lynch, Ankh Productions
Angela Jackson-Brown is an award winning writer, poet and playwright who teaches Creative Writing and English at Ball State University in Muncie, IN. She is a graduate of Troy University, Auburn University and the Spalding low-residency MFA program in Creative Writing. She is the author of the novel Drinking From A Bitter Cup and has published in numerous literary journals.  Angela’s play, Anna’s Wings, was selected in 2016 to be a part of the IndyFringe DivaFest and her play, Flossie Bailey Takes a Stand, was part of the Indiana Bicentennial Celebration at the Indiana Repertory Theatre. She also wrote and produced the play It Is Well and she was the co-playwright with Ashya Thomas on a play called Black Lives Matter (Too). In the spring of 2018, Angela co-wrote a musical with her colleague, Peter Davis, called Dear Bobby: The Musical, that was part of the 2018 OnyxFest in Indianapolis, IN. Her book of poetry called House Repairs was published by Negative Capability Press in the fall of 2018, and in the fall of 2019, she directed and produced a play she wrote called Still Singing Those Weary Blues. Her new novel, When Stars Rain Down, to be published by Thomas Nelson, an imprint of HarperCollins, was recently published and Angela was recently awarded, by the Alabama Library Association, the Alabama Authors Award in poetry.